After our successfull bikepacking trip to the islands,we arranged another couple of excursions for our clients including Marjan and her son Shayan. Marjan had been let down by the cancellation of a 3 peaks challenge due to Covid. The suggestion: Come up to us for a couple of days walking and at least do Ben Nevis, preferably via the Carn mor Dearg Arrette and we will manage to fit in something else on the way up.

I picked up Marjan and her son at Glasgow Airport early on a Friday morning from a London flight and drove North towards Loch Lomond with the ultimate destination of Fort William. At Tarbet though, we turned left to Arrochar and met Bill and Shirley in the carpark of the Arrochar hotel, avoiding the daylight robbery of the local authority car park at the foot of our destination., The Cobbler or Ben Arthur. The local authority have recently increased the price of a days parking in this car park to £8. Nothing but a local tax on Hillwalkers.

We walked uphill on a pleasant day if a little dull. it was however, warm and dry and a bit misty at the top. After a pleasant climb,there was nothing else for it but to thread the eye of the needle or go through Argyle’s looking glass. a hole in the rock leading to an exposed ledge and a short scramble to the top. It was a little misty but no wind It takes a little nerve and a head for heights but is a straight forward scramble.

This is the highlight of the climb and well worth the effort. Marjan was watching us climb it with just a little trepidation! It’s fair to say she was a little relieved to see us come down from the spectacular position.

great climb and now for the descent, and the run up to Fort William and tomorrows expedition.

The forecast for Saturday was terrible with heavy rain all day. Various alternatives were considered including canyoning and a via ferratta at kinloch leven, Colin Donnie and Amy decided to take this alternative but Marjan and Shayan had flown up from London with the intention of climbing the Ben. While the Carn Mor Dearg Arrette route was out because of the weather, there was always the pony track and we would be getting wet anyway! It was decided. We were off. Dave, Dawn and Jack along with Andrena decided to join us. We were off… 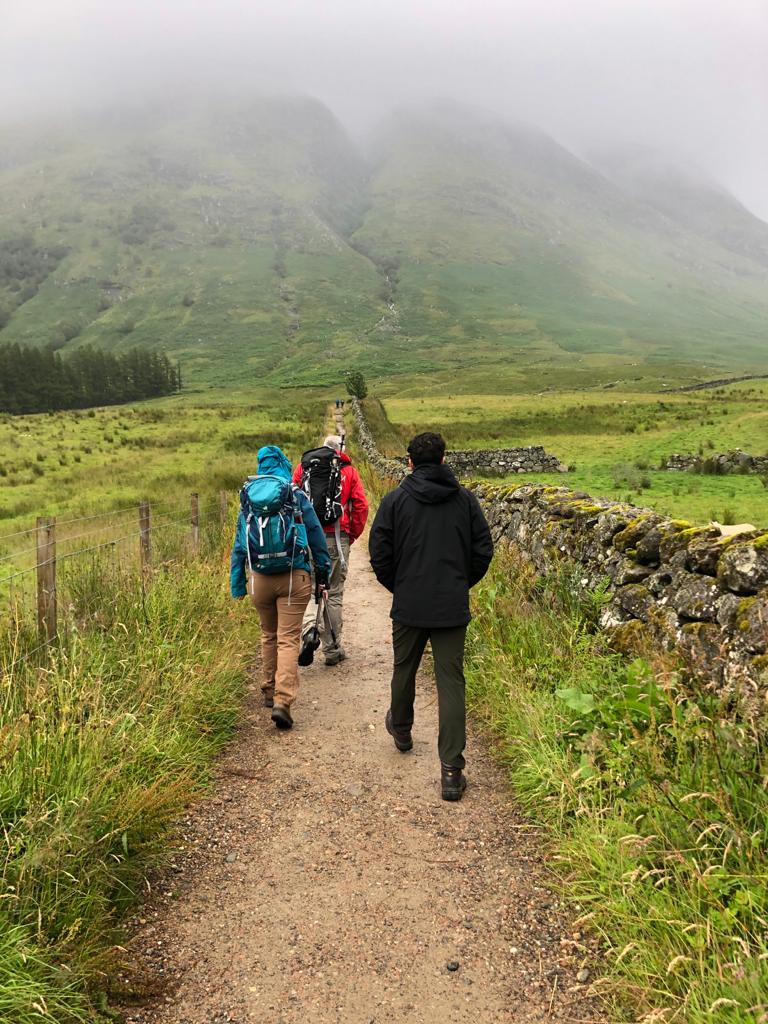 The approach to the Pony track from the Glen nevis visitor centre car park. The hill was shrouded in mist and drizzle fell constantly thoroughly wetting everyone. I was very greatfull for my Mountain Equipment waterproofs. Thankyou Mr Gore!

A long slow climb in the rain gave time to observe the other people on the track and the various standards of clothing worn, everything from shorts and T shirts and trainers, to city clothing and shoes. That was going to be interesting as they climbed higher and it got colder. There was snow on the top. Goodness knows what goes through peoples minds when they think about walking on this hill. Many drastically underestimate the seriousness of the expedition. By climbing the Ben, you are effectively going back a season due to the height, the temperature and the weather conditions. 99 times out of a hundred, under equipped people will get away wth it, but that odd time they won’t, putting at risk the lives of the professional rescuers and mountain rescue volunteers. People should be prepared for bad weather, the cold and with good boots. To say nothing of having a map and compass and knowing how to use them. Rant over!

We carried on up the hill and into the cloud, eventualy hitting snow just before the summit. Cold wet and elated we arrived at the summit for the obligatory picture

It was cold and damp when we finished time to break out the emergency shelter at least we would be dry eating our lunch!

We arrived at the bottom 5 and half hours after starting. Bang on the book time. Straight into the Achallader bunk house for a well deserved Lager shandy and chips. Well done folks! We had a celebratory dinner that night in Fort William before heading South and for Marjan and Shayan the London flight. Another great trip.